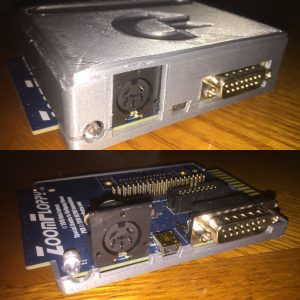 Greetings everyone. Both Desert-Fox and myself have ZoomFloppy cards and have for the longest time wanted to get cases for them. However what we’ve found is that in most cases the cases are more expensive than the ZoomFloppy cards themselves? Why is that? I don’t know either so we started looking for an alternative. Out on the WWW we found were some folks had come up with their own 3D case creations for the ZoomFloppy and looked into that, again another dead end. After taking the plans and going to several 3D printers online, they wanted exorbitant fee’s just to make a case for ZoomFloopy. The most recent quote I had was $72 for a freaking case. No way Jose!

As it turns out I discovered a co-worker has 3D printer and when I approached him about it he was more than happy to look at the 3D plans we have, BTW we’re using ZoomFloppy Project Case by ThingHuxter, and basically we’re only playing for the cost of the PLA being used in the project. Total cost about $23 total for the roll of PLA. If this is as successful as I hope it’s going to be I may end up getting my own 3D printer and offering some cheap services.