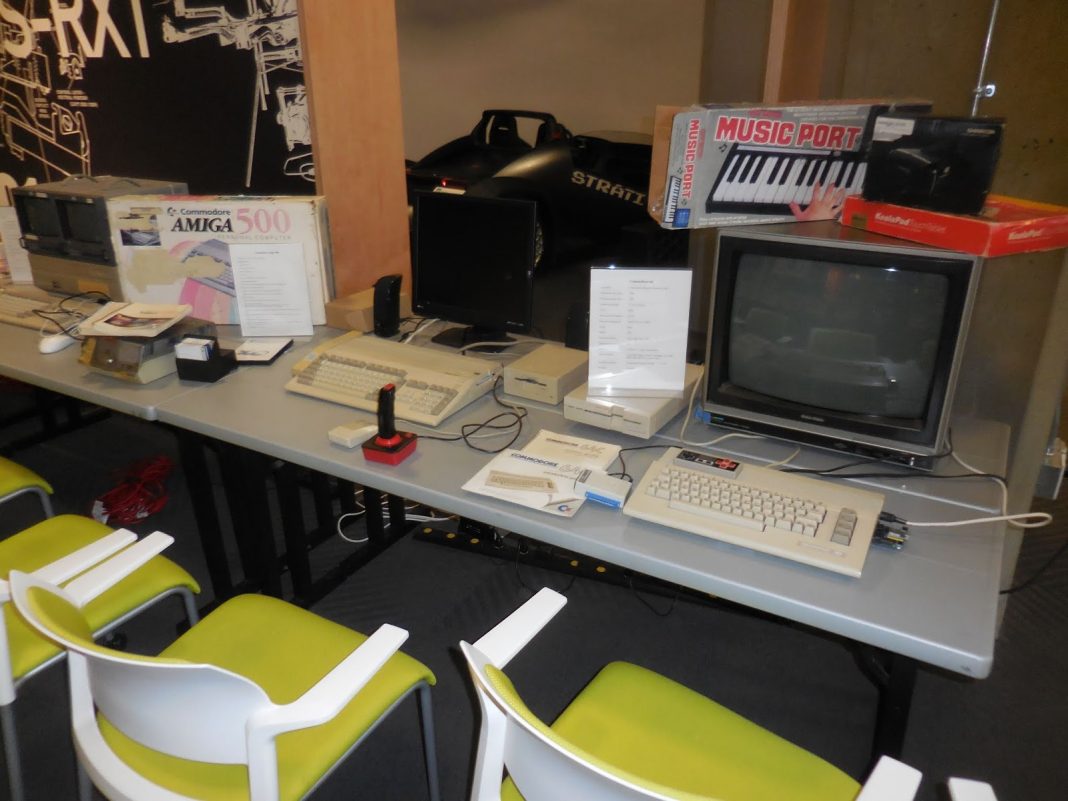 This weekend, June 8th & 9th, is the 3rd annual Pacific Commodore Expo aka PaCommEx 2019. Setup is currently taking place and Retro-Link.com has posted some pre-show photos which you can see by clicking here.

Eric has a Saturday presentation on the Amiga 1000 Development System. Afterwards in a separate presentation, he is planning to show off two “new-age” Commodore 64 machines – the Ultimate 64 and the C64 Reloaded. Eric is the driving force behind the Seattle Commodore Computer Club ( http://www.sea-ccc.org ).

Leader of the Puget Sound Commodore User Group ( http://pscug.org ), Ryan will be showing off his systems and fielding questions.

From the Seattle Retro-Computing Society ( https://www.seattleretrocomputing.com ) comes Gordon and his eclectic Commodore hardware.

Robert will be on hand to show off his eternal enthusiasm for the Commodore line as well as relate his globe-trotting experiences for Commodore and Star Trek fandom. He is the president of the Fresno Commodore User Group ( http://www.dickestel.com/fcug.htm ), the leader of the Southern California Commodore & Amiga Network ( http://www.portcommodore.com/sccan ), and is a member of The Other Group of Amigoids ( http://togausergroup.org ) and the Sacramento Amiga Computer Club ( http://sacc.org ). He is the organizer of the Commodore Los Angeles Super Show, the Pacific Commodore Expo NW, and the Commodore Vegas Expo.

The PET 4032 returns to PaCommEx, with the video repaired by Ray Carlsen and a petSD+ card drive from which to load programs. PET 4032 courtesy of Robert Bernardo

The computer which put CBM on the map! Sold from 1982 to 1992, the C64 has sold more than any other computer platform. This beige C64 is courtesy of Robert Bernardo.

Not just an ordinary Commodore 64 in a breadbox, this is the Ultimate 64, a redesigned C64 made of modern components. See https://ultimate64.com
U64 courtesy of Robert Bernardo

This mighty, 25-pound SX-64 has JiffyDOS and a new SharewarePlus SD2IEC. (See below.) SX-64 courtesy of Robert Bernardo

With 64K RAM and 121-color capability, the Plus/4 returns to PaCommEx. Plus/4 courtesy of Robert Bernardo

The C128DCR sports the more professional, all-in-one look, i.e., it combines computer motherboard and disk drive into one unit with a keyboard attached by flexible cable. C128DCR courtesy of Robert Bernardo

This Amiga CD32 comes with a set of game discs. CD32 courtesy of Robert Bernardo

This Amiga 500 has a v8.0 motherboard with OS 3.1, a SupraTurbo 28 accelerator; and extra, external disk drive. A500 courtesy of Robert Bernardo

Look for the new, user port-connected SD2IEC hiding behind the SX-64 at the show! This SD2IEC gets its power from the user port and is perfect for the SX.