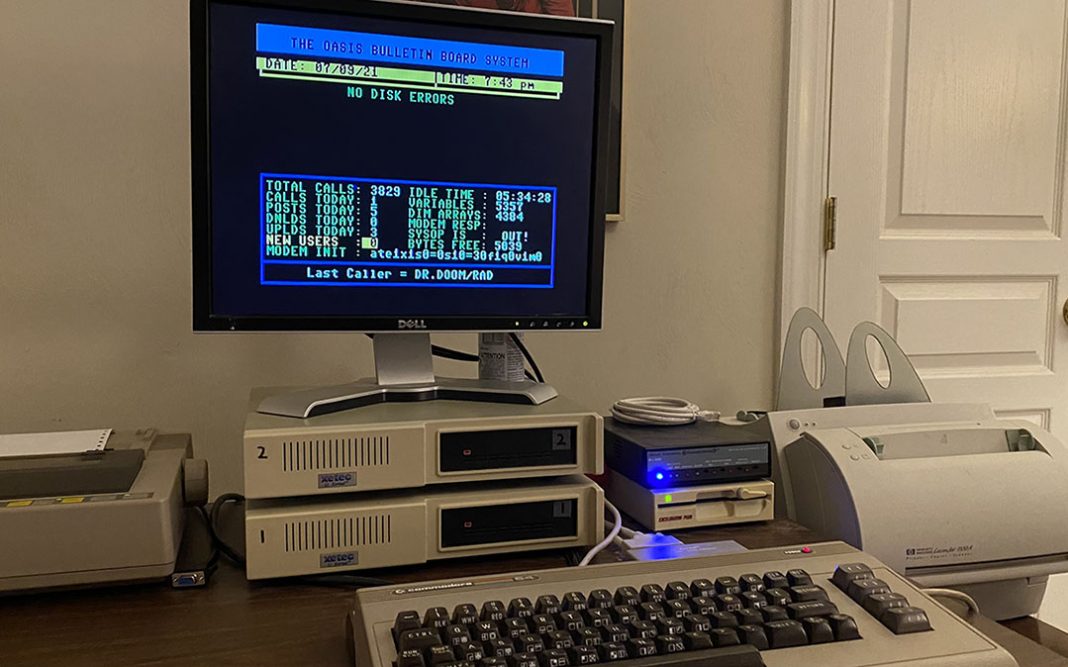 What, besides the obvious, do TimeWorks, RUN Magazine, Commodore Business Machines, Midnight Gazette, a multi-million-dollar leasing company, and hundreds of BBS SYSOPs worldwide have in common? And WHY do they all MISSPELL it?

What one product for Commodore computers was the first one of its kind ever announced, and remains the only one like it on the market today? And why do all of its advertisements MISSPELL it?

Behind those bafflements lies an answer with more than a kernal of truth. The thing all those folks have in common, the product which has so well stood the tests of time, the system whose name is intentionally misspelled — is the (still) amazing Lt. Kernal.

Back in 1985, the first national ads for the Lt. Kernal hard-disk system read “FULL SPEED AHEAD”: They called it “amazing”: They credited it with “blinding speed”. Funnh: All the magazine reviewers of the time said the same things (without cue cards). In fact, the system caught the C-64 market a little off-guard. Its debut came at a star-studded meeting of the Daytona Beach Area Commodore User’s Group just before Christmas of 1984.

That evening the users were thrilled to the company of dignitaries like author and Commodore/Pet guru Jim Butterfield, Commodore Business Machines public-relations manager Pete Bazcor, and the technical editor for RUN magazine, Margaret Morabito. They had gathered together far from their homes to witness the introduction of a product guaranteed to revolutionize the way people thought about the humble little C-64. That meeting, though, wasn’t so much a beginning as the culmination of over a year of fun and frustration, puns and punishing hours, and many hours of innovative and rewarding work.

The C-64 had been around for just over two years. During that time, the machine had established itself as the premier ‘bangs-for-the-buck’ computer in the consumer market. No other computer offered the combination of power and fun, glitz and muscle, and pure enjoyment that the C-64 provided. Those features are what got the LT. Kernal under way. But at its christening, the Lt. Kernal didn’t plummet down the slides in a shower of champagne: It was launched under the guise of a fortunate ‘accident’. It’s been steaming FULL SPEED AHEAD ever since.

The accident which spawned the Lt. Kernal idea came in mid-1983 in the form of a question. The principals to the story are Roy Southwick and Lloyd Sponenburgh, employees and managers of Fiscal Information, Inc. “FISCAL” is a large national provider of computer systems to the medical trade. Both Ray and Lloyd were involved at the time in designing those computers. The computers they designed were ‘mini computers’. Now, those aren’t PC’s — they are BIG, brawny, fast systems with up to dozens of terminals and printers attached, and with storage capacities that can extend to GIGAbytes. They’re not exactly mainframes, but they are a LOT bigger than PC’s. PC’s and mico-computers were not a large influence on Fiscal’s market at the time. But personal computers were becoming important: Lloyd hobbied with them: Roy asked Lloyd which computer would be best as a ‘first’ computer for his son. Of COURSE, Lloyd said, “Commodore 64”! And the rest, as they say, is history.

Roy bought a C-64 and the inevitable DATASETTE. It was only a couple of weeks later that he felt he HAD to upgrade to a floppy disk. After all, you need speed and large storage capacity to really USE a computer. Roy was used to really fast, really large systems, so a cassette system just wouldn’t do, at all. Yep! A floppy disk was just the thing. Pretty fast, pretty large, and very impressive. Yea, well — Three strikes, and you’re OUT! Imagine his frustration with the 1541! Don’t even consider that he had to take a second mortgage to afford it. Don’t even consider that it held only 172 Kbytes (K, man, not Megs!). Consider instead the speed —- Roy was used to systems in which loads were measured in MEGABYTES per SECOND. Suddenly he found himself faced with a disk drive that loaded programs at about 1200 baud! Well, Roy had an advantage over the average C-64 user. He was an ex-hardware-engineer turned programmer. And, interestingly enough, his friend Lloyd was an ex-programmer turned hardware engineer. Together they had a lot of technology under their command. So, Roy asked Lloyd the fateful ‘accident’ question; the question that breathed life into the Lt. Kernal. Discussing his C-64 one afternoon, he asked, “Do you think we could hang a hard disk on that thing?”

That simple question lead to a year of brain-breaking after-hours work for both men. As soon as it was apparent that the project COULD work at all, Fiscal lent its support in the form of funding and sanction for the work. Without that support, the Lt. Kernal could never have developed into the product it finally became: The work and equipment needed for the project were just too expensive for it to have succeeded as a ‘spare-time’ endeavor.

Just a little over a year later, the two men had compiled over THREE man-years of labor on the project. They had written, discarded, and re-written hundreds of Kbytes of DOS software. They had bags under their eyes. They had a working system.

Ok, So what if it only worked on the C-64. There WASN’T a C-128 yet. So what if it used the memory under the Kernal ROM… What GOOD was that memory, anyway? Ok… So the Lt. Kernal wasn’t exactly what it would eventually become: It WAS the fastest-storing, fastest-loading, and most versatile disk system ever built for the C-64 —- and the industry noticed, early.

At the product’s debut in December of 1984, Pete Bazcor of CBM said, “It changes the way people will view the C-64. Instead of being an accessory to the C-64, it’s a whole new storage system and DOS which uses the C-64 AS A PLUG IN ACCESSORY!”

And it DID change the way folks viewed the C-64. Suddenly people realized that real businesses with real businesses’ storage needs could use the C-64. And they could keep a couple of spare computers in the closet for what a service- contract would cost for a modest PC. Commodore loving BBS’ers also quickly noticed the Lt. Kernal, and that word-of-mouth network spread the news about the Lt. Kernal even more quickly than advertising could. And when they spread the news, they MISSPELLED the name.

Of course, they had help. Roy and Lloyd intentionally misspelled the drive’s name when they named it: But what more respect does a bad pun deserve, anyway? You see, the product’s name was a pun. So what better fate than to have it be a misspelled pun?

The orignial drive’s DOS ran in the RAM underneath the kernal ROM of the C-64. It was a major feat to get it running there; more than major, in fact. Hmmmmmm…. More than major…Under the kernal ROM…. Above the Major, beneath a Colonel…. A Lieutenant
Col..ur, Kernel. <groan!>

But Commodore had misspelled the ROM’s name in all of the C-64 documentation. They called it the k e r n A l. So Roy and Lloyd followed suit. They nicknamed the project ‘Lt. Kernal’. It was JUST a nickname — something they could call it besides ‘the C-64 based, 1541-compatible hard-disk and DOS’. Who thought it would stick?

Well, the name did stick, and the product stuck around, too. It survived the onslaught of numerous competitors. In fact, even though it was the first such system to be announced, it was NOT the first hard-disk manufactured fo the C-64. Three other products had come on the market (and two failed) before the first Lt. Kernal rolled off the assembly-line. But the Lt. Kernal was the first of it’s type… and so far it’s the only drive ever to use the really FAST parallel transfers which give the Lt. Kernal its incredible speed. While other drives were measuring their load-speeds in seconds-per-block, the LT. Kernal touted speeds of several K (38K, actually) per second. That amazing speed, a new, versatile DOS, and the marketing and packaging expertise of a Kansas firm called XETEC kept the Lt. Kernal in production while competitors arrived in the marketplace… and left.

Xetec, Inc. of Salina, Kansas had approached Fiscal to secure manufacturing rights to the product. Xetec had experience in the consumer-oriented Commodore market. Since Fiscal’s main thrust was in a different area of computing, entirely, this agreement seemed to be best, both for the companies and for the Lt. Kernal.

About this same time (1987), Commodore had begun to ship the new C-128 computer. In order for the Lt. Kernal to succeed in this ‘new’ market, it had to be completely re-engineered to work with both the C-64 and the C-128. By late 1987, the Lt. Kernal had been entirely re-designed, and the DOS completely rewritten. The system was much faster, much more CBM compatible, and now used NONE of the computer’s RAM. The project represented over NINE man-years of effort when Xetec began to market and manufacture the drive. And still the Lt. Kernal evolved and improved.

Early customers were treated to free DOS software upgrades. They were given free CP/M compatibility, when the support programs were finished. The system became ever more capable, more CBM compatible, and yes, even FASTER. No effort has ever been spared to provide service to the customers. The Lt. Kernal customers continue to enjoy what they term ‘service of a quality unique in the industry’. The product – the IDEA – is a success.

What do all those businesses and SYSOPs mentioned earlier have in common? They are all Lt. Kernal owners. Chances are, you know someone who owns one. The drive is the only product of its kind on the market.

And: Its name is MISSPELLED!

NOTE: We are not the original authors of this article and want to give full credit where credit is due. This article and some to follow are from a package of Lt. Kernal documents and emails we recently recovered and wanted to share with the BBS community in 2021. So here they with a few more to come. If by chance you have an original copy of this article and it’s author or publication please let me know so I can append it with the appropriate byline. We hope you enjoy reading them.