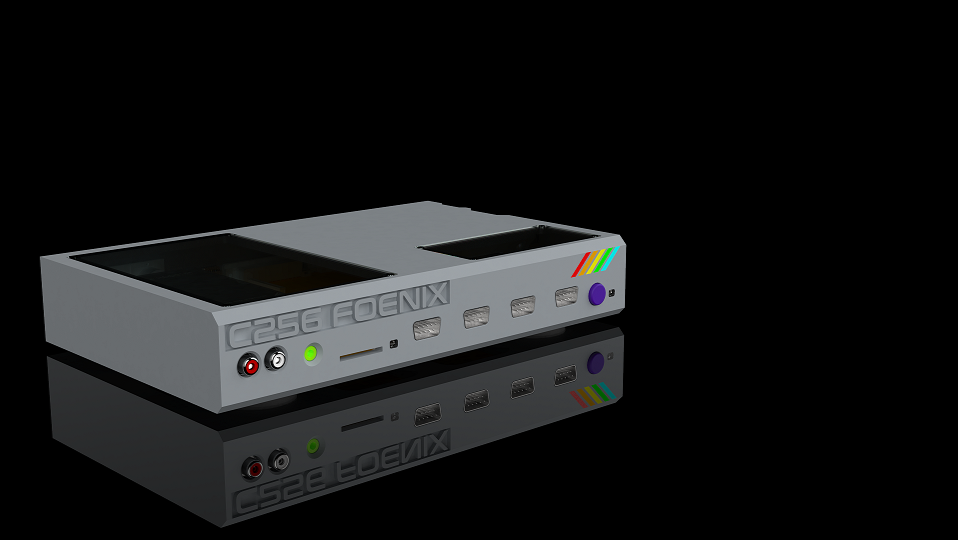 From the March/April 2020 Newsletter

In the last month or so there has been an uptick in the demand for the C256 FMX. Towards the end of February, I was looking for to move on to the next step of the project… But because there was a certain demand I decided to update the RevC4A with some minor changes and to get a new batch of boards made. However, the Rev C4B will come with certain changes when it comes to the time to order.
The Rev C4B which is now offered in Light-Grey with a yellow solder mask PCB won’t be shipping with USB Blaster/Power Supply nor Keyboard or Mouse. The point of all this is for you to save money and time. By the time RevC4B is released the FPGA ought to be quite stable, so there might not be a need to reprogram it. The Power Supply that has been provided so far as been substandard and these days those 12V wall mount power supply 2.5mm barrel connectors are very common. Finally, the mouse and keyboard can be bought from Amazon and will end up being cheaper. Since I am not in this to make money, then there is no point in buying those items and resale them which increases the cost of shipping and this is more work for me. The more time I have, the easier it is to come up with new units. Anyway, at the end of the day, you also benefit because the Rev C4B will be less expensive.

The status of the RevC4A (Black or Silver Enclosure with Black PCB) first batch is pretty much done. I am waiting for a couple of enclosures to print, the last units will be shipped together and I will be moving on to the next batch. As mentioned in the header, the first batch were the orders placed from May 2019 to the end of July 2019. The second batch will be everybody that placed an order from August 2019 to February 2020.
In February I began to have a problem with my 3D Printer and it caused a lot of delays and I never really found the real source of the problem which was essentially the under extrusion in the last inch of the print which rendered the end results completely useless. That got me to waste a lot of filament and time. I end up buying a new printer and I figured that if I managed to fix the old one then I will be able to print twice as fast. So considering the state of the world, I am really looking to start shipping those by the end of April. Now, in theory, I have pretty much all the parts that are needed to finish those.

On the Technical news, when the first batch of units was shipped the graphic controller was still based on the VICKY design I did in the RevB2. For a long time, the idea was to upgrade that core but I was too busy making units. Now, in the last couple of weeks, I went back to it. The idea here is now that VICKY has a larger bus for the Video memory, the through-put has been enhanced which allows more features to be implemented. Among those features will be the support of multiple resolutions:
640×480, 320×240, 800×600 and 400×300 with a ton load of sprites etc, etc…
I am really looking forward to finishing that design because it will mean that the overall design of the unit will be drawing to an end since the only thing left to do after will be to finish the different DMA controllers to support data transfer for the IO devices and Sounds (DAC/ADC).
1 of 3

A lot of stuff to show in this release:

I’m working on a little game/demo of the C256 Foenix FMX. I’m just winging it, so I’m not entirely sure what it’s going to be when it grows up. But it will have a space ship flying around, and it can shoot a torpedo that makes an annoying sound. Right now, this is showing two sprites that are independently moving and animating. Engine noises being generated by the SN76489 sound chip, and a simple tone generator / sequencer able to drive the three tone voices on the SN76489 (only one in use at the moment). All of this is being driven off the start of frame interrupt. And the star field is made up of tiles that are randomly chosen with the help of the FMX’s built-in random number generator.

There’s lots more I want to do with this, so this is a work in progress. At some point the source code will go on GitHub, and I will probably do a video explaining the various things it demonstrates.

It is a very crude port of mgcaret/of816 Forth.

Daschewie is presently working on interfacing the C256 Foenix with a WIFI serial box that will allow him to connect to BBSs. Great Job! I am really looking forward to seeing that when fully working!

Daniel the owner/maintainer of Foenix IDE has been hard at work lately. He has been improving the tools considerably and on top of that, he has created 3 New videos for us to better understand how to set ourselves up when we are beginning then, how to use the different tools inside Foenix IDE for graphics and finally how to install the tools on Windows 10.

Even if there is more and more information about the machine going into the wiki on the website and some on the forum, I think we have been missing something lately.
Early on I tried to stay focused and invite only the people that were really interested in the project and were committed to helping but the closer we get to have something finished the more people are interested and would like to know more and I feel that right platform to do that would be to have another Discord channel dedicated to the people that want to know more and would like to have discussions about it.
So this is why I am opening this discord channel for the general public for anybody who wants to know more and would like to chat with the existing users.