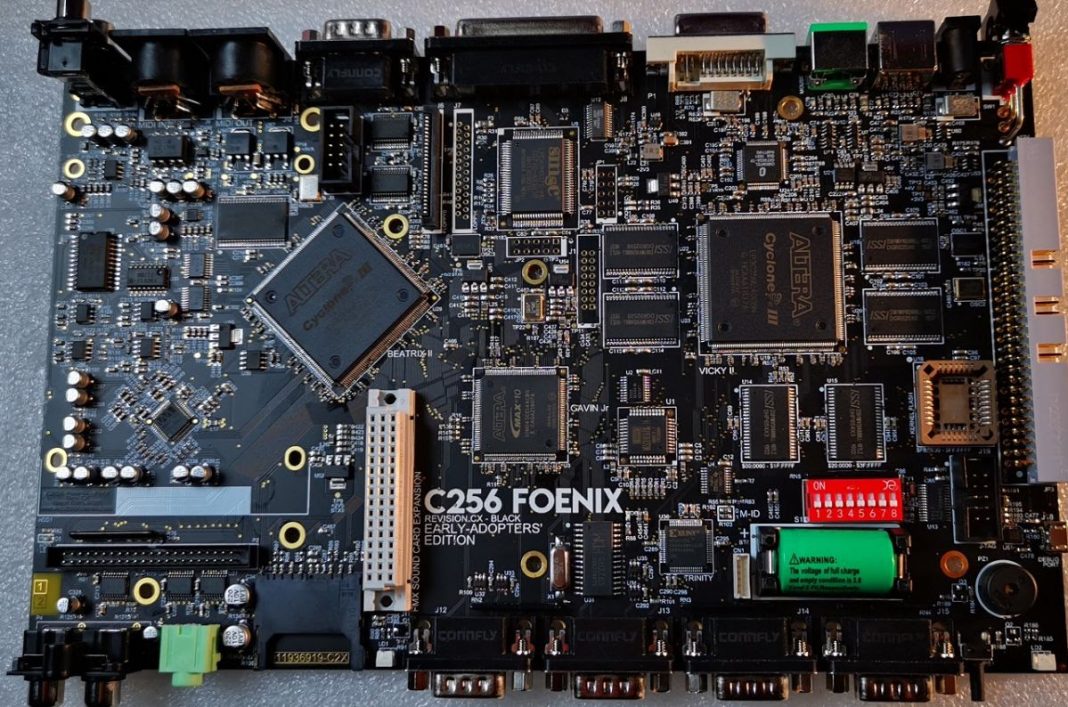 From the October 2019 Newsletter:

RevCX is to the RevC0 as RevB2 was to RevA…

It is pretty obvious for anybody who has been following my monthly updates that there has been a major shift in between RevC2 and RevCX and for very good reasons. Without reshuffling issues of the past, suffice to say that after the previous failures there was a need to reconsider the project in its entirety. Taking two steps back before walking forward so to speak.

The idea of using BGA was to increase the number of pins available to me to expand certain areas of the design. Since the beginning of the project, I was using Altera’s Max10 series (I know it is Intel now) which I was pretty content with. So, in a way, when I decided to expend the design I was kind of indoctrinated in this part which I didn’t want to go away from. The 144pins packages of the SC family had the benefit of being powered by only one supply as opposed to 3 which was helping a lot on the layout and component side of things. However, there was the conundrum of the 0.8mm uBGAs that are frequently used these days where it will force you to have a 6 layers PCB with some very small vias and so on and so forth. Which overall increases the cost of the whole project. How was I going to be able to have more pins but without having to use those damned 0.8mm pitches BGAs? Well, the only solution was to use the 1mm pitch BGA which doesn’t seem much, but at least it was a way to reduce somehow the restrictions of the PCB layout hence reducing its cost. But that choice came with a heavy price, the additions of many power supply rails and for a while, I was on the fence about going on with these changes. Finally, I succumbed to my innate desire to please my patron by giving them more and looking back I am not sure it was the best idea. I could have simply fixed the RevB2 and I would have been done with it… However, without going through this hell, I would not have come to this epiphany which was to look outside of the MAX10 family. (A costly path I know)

Besides, it was obvious to me that by using BGAs I had lost something from the original vision which was to keep a 1990 type look among other things and those BGAs just took that away. But when I found those magnificent beasts I was in heaven. Those parts in their structure are very compatible with the Max10 aside from being almost 10years old, but their packages just changed everything. Power supply wise, since the 3 Power rails were already there, then, it was a very small step to take. The PCB went from 4/4 6 layers to 6/6 4 Layers. I had to do all the changes and replace everything and re-layout everything. And there it is… But, those big ass packages are taking a lot of space and I had to make a sacrifice about the Sound portion which I believe turned out to be a great idea… From that came the Audio Expansion Board (the SERA Board).

The First Audio Expansion Board: (The Sera Board)

This Audio Expansion will complement the already existing OPL3 installed on the board. Which ought to make for a mighty Audio Computer and this is the C256 FMX!

With all those iterations, it was bound to help the design stability but as anybody who does electronic design knows, for each change you make there will always be an impact either at the change point or somewhere else. I have to admit that I was surprised to see so little changes or problems. My biggest problem came in the form of an Oscillator switching power supply. Anyway, I am putting in place a solution that ought to remove the problem and so the RevCX will live on its actual form.

So, the plan is:
Within the next week, I will complete the testing of the board and address all the issues that would require changes on the board. Then the “Final” version of the C256 FMX PCB will be sent to manufacturing where a big quantity will be ordered.
I already have all the parts ready.
So, I plan on starting the assembly of those boards towards the end of the Month. Which means that I ought to start shipping those units by early November if there are no other issues. However, the shipping will be interrupted in November since I need to travel for a few weeks. I will give more info on the November update.

Dan our Tracker guy has decided to change his mind for a while by creating this very rudimentary version of Frogger. This video has been recorded from the game actually running on the RevCX board.

Mike Bush who is actually designing the Workbench (FX/OS) for the C256 Foenix is hard at work and things are progressing nicely. If it wasn’t for me not being able to provide all the support that he needs in terms of features implementations, I am sure he would be farther ahead but… C’est la vie!

Don’t forget to check all his other videos, the progression is really cool. He has come from very far away!

You can still purchase a C256 FMX, I have purchased extra components. So the delivery would be around December at this point.

When all the orders of the pre-sales are fulfilled, I will put some time into creating the smaller/compact and more affordable version of the C256 Foenix, I hope to be able to release it in Dec 2019.