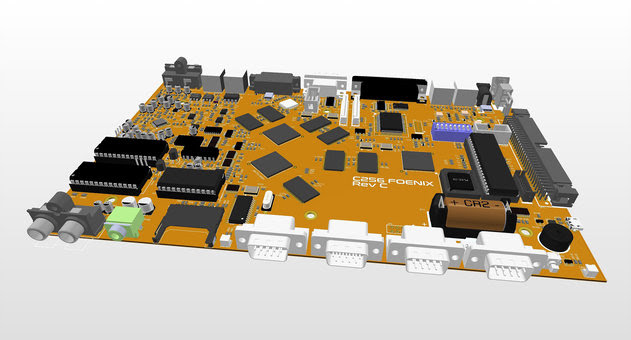 From the July 2019 Newsletter

The last 2 months have been really busy. First the support of the early adopters, then the transport of the design from Eagle to a different PCB software plus everything else in the middle. Lots of questions have been asked about how the Rev C should be as I planned it to be the last development platform for the Foenix before next year, the final version… The user version (planned April 2020).

So where do we stand? The schematics are 98% done, as you can see above, the placement is finished. The routing of the board is about to begin. After all the necessary verifications I am looking forward to sending the Rev C to the PCB manufacturer within the next 2 weeks.

The next step will be to build one by hand to do a bring up and to verify that the design is perfect (no bodge wires or patches). If it was the case, then a RevC1 will be necessary which will delay by a couple of weeks the whole process.

So, if everything goes fine, the pre-sale will begin shipping Mid-August as advertised. It is still time to get your own.

As I told so many people before, from the very beginning I saw the C256 Foenix to be a fantastic music machine and after going through Rev A/B2 design and seeing what a few early developers were doing with the machine, I thought I would raise the ante. So, I decided to spin the Rev C into 2 different models:

On one hand,
the original C256 Foenix which will be basically an improved RevB2 without the SuperIO chip where the cost of the unit is the main goal and where the main focus of the machine will be general usage, gaming & programming.
On the other,

the new C256 FMX (Foenix Music Expansion) will be an enhanced version of the original Feonix. The FMX will have more memory for the CPU, a faster Graphics Engine to allow 800×600 for a GUI environment, more sound of course. The C256 FMX will include 2 Sockets for real SID, 1x YM2612, and 1x PSG, plus 1MBytes Sampling Buffer for capture and playback or for music storage which will give a total of 9MBytes of memory for the whole system. The FMX will provide a 44pin IDC connector to connect a 2.5″ hard drive as well as the Floppy Reader.

The MIDI connectivity has now been limited to the FMX version.

Below is the amazing work of some who got into the early-adopter groups. They received their unit in April 2019 and below is a status of where they are now… Only 3 people created these things…

Do you want to part of this? Get yourself a Rev C while you can! 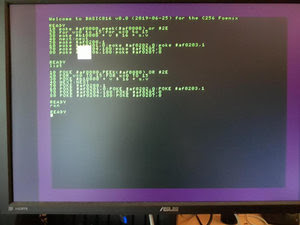 BASIC816 for the Foenix

PJW, aka Tail Recursive has been designing from scratch a BASIC interpreter for the Foenix. To this day he is at the point where you can peek and poke the system, every weeks he adds more instructions. PJW is looking for to do a pre-release around the time the Rev C will begin shipping.

Mike is another insane person that has decided to jump in the crazy wagon and to develop a GUI/OS for the Foenix. Considering that he has been working mostly on the fundamentals up till now. I can only imagine how it is going to be when he is done and I am looking forward to see when it is all finished. Right now, he is waiting for me. Also, the FMX version of this will be amazing. 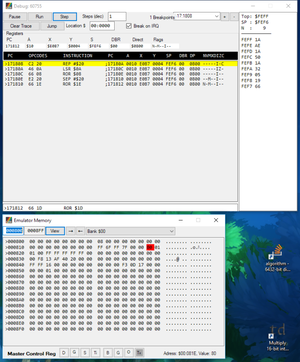 Dan has been a fan from the first hour. He has been the one to take on at first the Foenix IDE which is a tool for the Foenix in order to simulate/emulate/debug and to download/upload code or data from or to the machine.

Then he went on to develop a tracker for the Foenix that his working on right now.