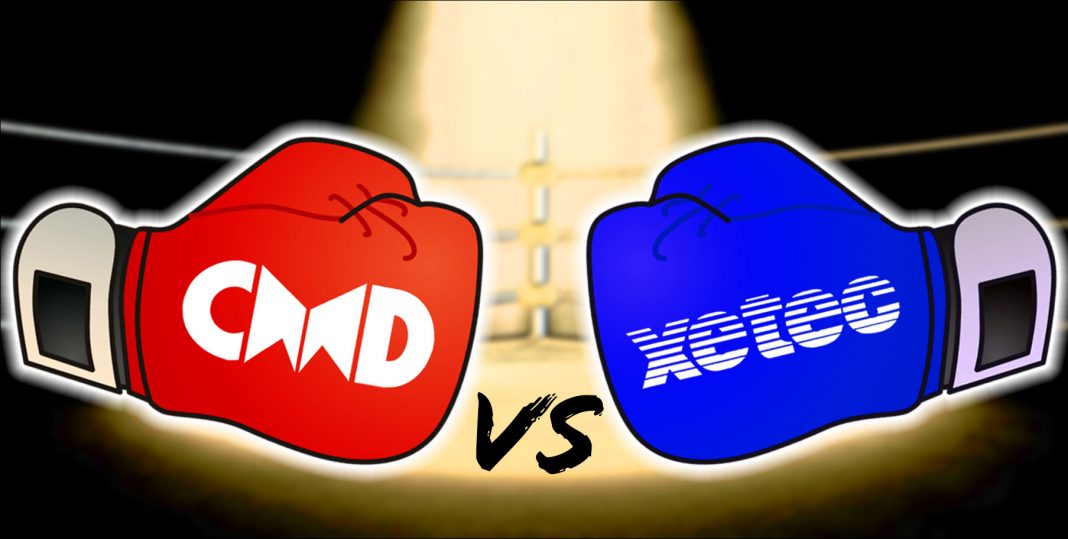 -NOTE- This is a reprint of an OLD text file. It was originally written by Sam Lewitt. He ran a computer business called Thunder Bay Computing in California. It is where I bought my Lt. Kernal. Sam was very influential with the development of Color 64 BBS. He wrote many of the fixes, tweaks, and mods for the BBS program. He also wrote the Plusterm, a stand-alone terminal program for Color 64, and was the author and creator of NET 64 the network software for the BBS. And now, Sam’s comparison of Creative Micro Designs HD-20 series and Xetec’s Lt. Kernal.

Well before I get into it, let me just say that I started my own business in January of 1989 selling only Lt Kernal hard drives (we’ve since expanded of course), so anyone reading this may think that I am biased. In a way I am, but read first before you pass judgment. I’ve run a 2 line BBS on a 60 MB Lt Kernal for more than a year. At one time we had 3 lines.

I received a developer’s HD-20 today. By the way, everyone that owns one at this point is considered a developer as CMD has not yet received FCC approval on these units. (NOTE: FCC approval happened in 1990.) This is the reason why CMD HDD’s are not available through a dealer yet.

Anyway, I got right into it. The manual was pretty well laid out, and I found myself up and running in about 15 minutes. An extremely easy drive to set up. The hard drive unit itself comes in an attractive compact case (about the size of a 1581). Along with that, there is a separate power supply to power the drive which closely resembles a 128 power supply.

On the back of the unit are 5 DIN-type outlets. One is for the power supply, and two are your standard serial ports (just like on the back of a 1541). The other two are currently unused at this time. They are labeled “auxiliary” and “parallel”. Above them is one standard DB-25 SCSI port for connecting the drive to other SCSI devices. On the front panel are a set of LEDs and membrane-type switches. With these switches, you can reset the drive, write protect it (which doesn’t make sense to me at this time), and have a handy-sounding function to swap device numbers.

There are quite a few features of this drive that I really like. For one, the built-in clock is pretty nice. This clock time/date stamps all files on the drive. Something that the Commodore needed for a long time. Now if only the drive could auto-boot the computer in 64 mode, we’d be in business. The BBS could crash, reset on its own, and retain the proper date and time.

Another big plus for you Amiga hopefuls or owners is the ability to “share” the drive. You may set a “foreign” partition on the drive, and use the standard DB25 connector on the back. At this time it is NOT a reality, but something that is being worked on.

The claim itself is a nice one. Whether you can run BOTH the 64 AND an Amiga (or IBM) at the SAME TIME, I do not know. It’s also important to note that the Lt Kernal can be used on an Amiga as well, but the entire content must be formatted. The two computers cannot co-exist without one having all of it (if that makes sense).

Another feature that I haven’t tried yet, is the emulation partitions. You can set a partition (or more than one) to emulate a 1541, 1571, or 1581 disk drive along with other “types” of partitions. Immediately, the program LYNX came to mind. On a Lt Kernal, you cannot use Lynx as Lynx depends on a certain drive format. There are probably many other 15×1 type programs out there that rely on talking to a 15×1 drive.

Unlike the Lt Kernal, the HD-20 doesn’t wedge itself in and out of memory and otherwise create havoc for certain types of software. This drive felt like it would load and run anything without any problem. Unfortunately, when I went to load up my favorite 64 word processor, the drive completely choked on it and repeatedly locked up when the word pro attempted to access anything on the drive.

The drive comes with Jiffy/DOS which is a ROM chip you need to install in your 64. Installation is a piece of cake. I already had JiffyDOS, so I didn’t have to do anything but plug the sucker in and power up. I might note as you’ll see in the performance chart, that this drive is as slow as the slowest 1541 without JiffyDOS installed or disabled, so it appears that the “magic” is in the tiny little JiffyDOS chip.

If you currently run a Lt Kernal and were wondering whether the two will work together, the answer is yes. BUT there is a tradeoff. You must run the HD with your JiffyDos off. I don’t believe this would be a problem as you can store your BBS modules on the LtK for load speed, and store uploads, etc on the HD where load speed makes no difference. This is great news for those with Lt. Kernals who would like to add more storage. Simply add an HD!

I have also tested the HD on my multi-line BBS. I have 2 lines, but 3 ports. The 3rd I use for dealing with maintenance duties without having to tie up the BBS. It appears that the HD works fine on a multiplexed system, yet the HD is only acknowledged on the port it’s physically connected to.

OK, here are the stats. All times are in seconds. I did each function exactly 5 times and took the average to arrive at my figures. Yours may be different depending on many variables. On the SEQ Read/Write test I started timing AFTER the file was opened since my LtK is near full and the HD is empty. A simple for-next loop was used to GET# or PRINT# random data to the drives.

It is interesting to note that the HD WROTE seq files consistently faster than it read them. Also, you should be aware that these SEQ tests are not really a measure of how fast their reading and writing is, because there are faster ways to GET bytes from the drive. But the ratio between the two should remain the same regardless of the method used.

I was impressed! To see these kinds of results while using the SERIAL port is nothing short of amazing. Although the Lt Kernal is clearly a winner in speed on all tests, considering the price tag difference between the two drives, I don’t see the advantage in going with the Lt Kernal. Unless of course, you plan to run a multi-line BBS or need some of the LtK’s special built-in systems (like the Keyed Random Access) you don’t have much of a choice.

This is also not to say that the Lt Kernal is a bad drive. On the contrary. I love my LtK, and the LtK will have features that the HD will never have. I’m also in business to sell the Lt Kernal (and the CMD when they get FCC approval), but dollar for dollar, the HD appears to be the better choice.

Especially when going after a larger than 20MB storage. A 100 MB HD retails for $1299.95. To buy the same thing with a Lt Kernal (you’d need to purchase a 20MB, and 2-40MB add-ons), the retail price would be…well, I can’t find the retail price. OUR price would be about $2600.00, and our prices are well below retail. That’s quite a HUGE difference there!

However, I honestly believe that Fiscal (the creators of the Lt Kernal), and Xetec (the people who market the drive) will eventually lower their prices significantly on the Lt Kernal line. Not doing so in my opinion would be [is] suicide for the Lt Kernal. Where we used to sell several Lt Kernal systems a week, we have yet to sell one single unit since ads first came out for the CMD HD. Not a one!

I hope this little “article” may have shed some light on your hard drive purchase decisions. My intent was not to go into detail about how the drive operates (because I have just played around with it for a few hours) but to give you an idea of the differences between the two drives as far as speed goes. If you would like to contact me because I said something you didn’t agree with, or I said something that wasn’t true, or you’d like to give me a hard time because of something I didn’t say, or maybe you’d just like to pat my back and say hello, you can call:

NOTE: We are not the original authors of this article and want to give full credit where credit is due. This article was originally written by Sam Lewitt, the SYSOP of a Color 64 BBS called Terrapin Transit from back in time, at the height of BBSing via a modem. This snapshot of history was uncovered in some old archived SEQ files we recently recovered and wanted to share with the BBS community in 2022. So here is another with a few more to come. We hope you enjoy reading them.