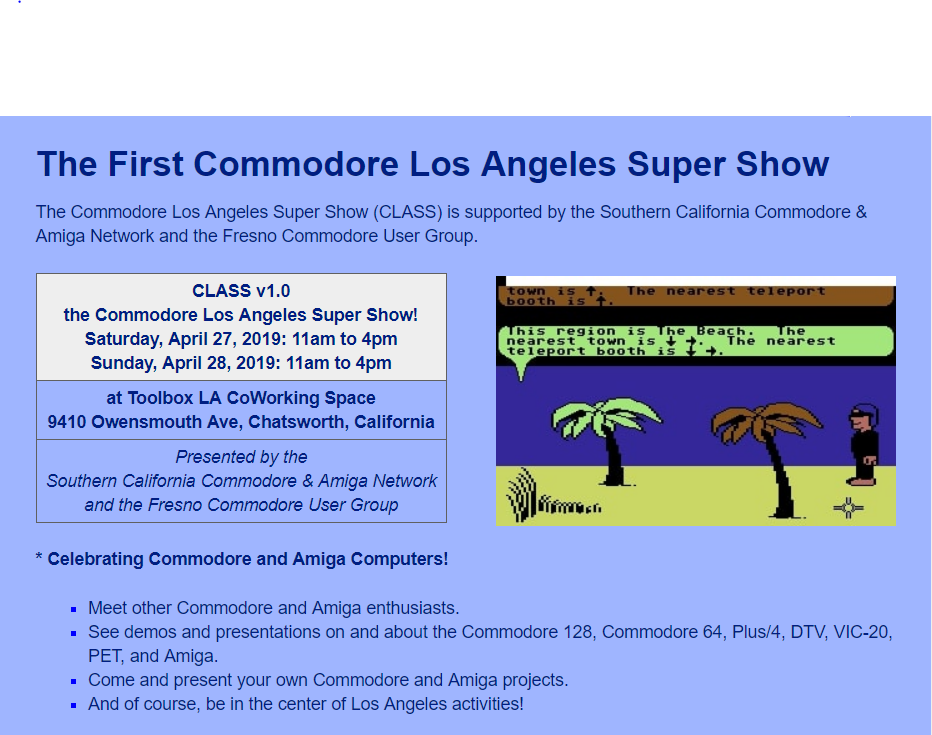 The very first Commodore Los Angeles Super Show aka CLASS will be held on April 27-28, 2019.

The CLASS website is now on-line at www.portcommodore.com/class and discussion of CLASS is in the shared forum area with CommVEx at www.commodore.ca/forum/viewforum.php?f=6.

Up for display is the new A.L.I.C.E. (A Laptop Incorporating a Classic Experience) laptop which runs AmiKit X and Amiga OS 4.1 Final Edition, update 1. See the unboxing here.

This is the last product to come out of Commodore Business Machines. The CD32 was advertised as the first 32-bit game console. CD32 courtesy of Matt Brewster

The follow-up to the original PET, the PET 4032 has a full-sized keyboard and more RAM. PET 4032 courtesy of Robert Bernardo

Before the C64, the VIC-20 was the multi-million seller. This one comes with a Behr-Bonz multi-cart of games. VIC-20 courtesy of Robert Bernardo

The Ultimate 64 is a new motherboard which recreates the Commodore 64, the computer which put CBM on the map! Sold from 1982 to 1992, the C64 has sold more than any other computer platform, and this U64 is housed in an unobtrusive brown case. U64 courtesy of Robert Bernardo.

CBM’s attempt to market a transportable computer. Released in 1984 but essentially gone by 1985, the computer was a wonder with its color monitor and relatively light weight (25 pounds!). SX-64 courtesy of Robert Bernardo

Celebrate the 35th anniversary of Plus/4 with an exhibit of the Plus/4! Plus/4 courtesy of Robert Bernardo

The follow-up to the C64 and the Plus/4, the C128 was the epitome of 8-bit computers. C128 courtesy of Robert Bernardo

Watch the forum and the website for upcoming announcements and changes!