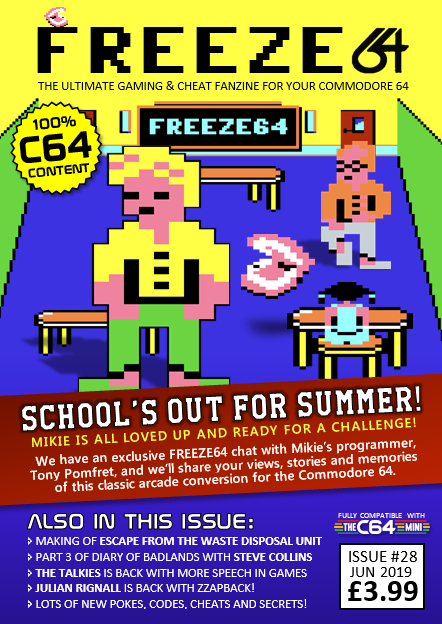 COVER FEATURE: MIKIE BY IMAGINE/OCEAN SOFTWARE
As well as checking out the fab arcade conversion of Mikie from Imagine Software, we also share some of our readers’ memories and comments of this classic game.

BITS ‘N’ BYTES
Is Parasol Stars *really* coming to the Commodore 64? We find out more background information from the man behind the possible release of a long-lost title.

JULIAN RIGNALL’S ZZAPBACK!
Julian Rignall celebrates top scorers from Issue 9 of ZZAP!64 Christmas 1985, which include: Koronis Rift, Ballblazer, and Robin of the Wood… with a few not-so-great C64 titles thrown in the mix.

SECRET SQUIRREL INVESTIGATES
Can he really find *more* secrets? He certainly can with some hidden gems from Mikie, Tubular Bells, Jet Boys, and Footballer of the Year.

CODER’S CORNER: TONY POMFRET
He’s one of our favourite Commodore 64 programmers who created some of the most iconic games for our beloved machine. We chat with Tony Pomfret about his time with Imagine and Ocean Software making games such as Hunchback 2, Rambo, Mikie, Daley Thompson’s Decathlon… to name but a few.

LET’S HACK: MIKIE BY IMAGINE SOFTWARE
We’ve given it a mini review, and also chatted with its programmer… and now it’s time to hack the game and share a few exclusive POKES ‘N’ CODES.

THE TALKIES – C64 GAMES WITH SPEECH
The popular Talkies feature is back for a third(!) helping, which includes: BMX Kids, Bomb Usal, Chimera, and Jonah Barrington’s Squash.

NEW & EXCLUSIVE POKES ‘N’ CODES
It’s the reason why I started FREEZE64 in the first place! POKES, POKES, POKES! We provide some new and exclusive POKES ‘N’ CODES for the cute platformer, Tenebra Macabre. The Moon Jump feature is priceless!

MY C64 HEAVEN WITH MARIUS MYHRE
All the way from Oslo in Norway, FREEZE64 subscriber Marcus Myhre shares his C64 collection with us all. And what a nice, little collection it is.