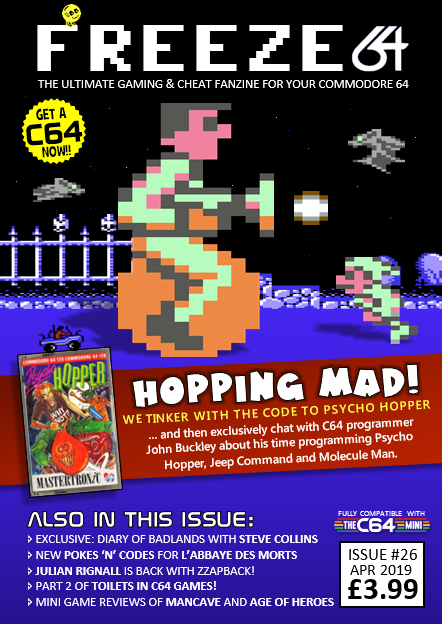 Issue 26 of FREEZE64 includes the following features and is now avaialble.

COVER FEATURE: PSYCHO HOPPER
This game will send you hopping mad, but fear not because we provide you with a mini-review and then hack the game to pieces so that we can provide you with some cheats and features.

OUT OF THE ‘MOULDY CUPBOARD’
We jump into the Mouldy Cupboard and dig out Planet Attack by Scorpion, which is a Scramble style arcade game from 1985.

DIARY OF A GAME – THE MAKING OF BADLANDS
Our first installment of the making of Badlands by the great Steve Collins, who is the programmer behind last issue’s cover feature game. Steve takes us back to 1988 when he started producing Badlands for Domark. Are fab and exclusive series that I *know* you’re going to enjoy.

BITS ‘N BYTES
We’ve got a special message to share with one of our lovely subscribers, plus we have a list of new Commodore 64 games on the way.

JULIAN RIGNALL’S ZZAPBACK!
We can’t believe it; you can’t believe it… but it’s *true*! The great Julian Rignall write for FREEZE64, and in this issue he celebrates C64 games that received a SIZZLER award from ZZAP!64 magazine issue 7, November 1985.

SECRET SQUIRREL INVESTIGATES
Our intrepid agent hunts for more hidden messages within games. This time round he shares an amazing hidden message in Blue Max, and also an interesting screen in Jack the Nipper

CODER’S CORNER: JOHN BUCKLEY
He created our cover feature game, and also other C64 hits such as the fab Jeep Command and Molecule Man. We chat with John Buckley about his time producing C64 games for Mastertronic, Ocean and Bug Byte. Another great story to share with you all.

GAMES OF THRONES – PART 2
Part 2 of our Games of Thrones – Toilets in Games feature. We have a few surprise entries, which I’m sure you’ll find crap ;-P

WE DON’T DO REVIEWS!
Haven’t we already told you that we don’t do reviews! Anyway – we have the mini reviews of Mancave and also The Age of Heroes. Two top Commodore 64 games on their way to you.

THE MAKING OF… STAR TROOPER
Back in 1984, Melbourne House released an arcade shoot-em-up on the Commodore 64. We chat with the game’s programmer, Cliff Ramshaw, and find out about the making of the game.

NEW & EXCLUSIVE POKES ‘N CODES
As always – we have another bunch of exclusive POKES ‘N CODES for recent C64 releases. This time round they include L’ABBAYE DES MORTS, TENEBRA MACABRE, DOC COSMOS, and SIZZLER.

MY C64 HEAVEN WITH MARK HELLEWELL
We chat with the lovely Mark Hellewell who shares his C64 collection with one and all. He’s got something pretty special to share with you.

Shipping is avaialble in the UK and the Rest of the World. Click the link below to get yours.