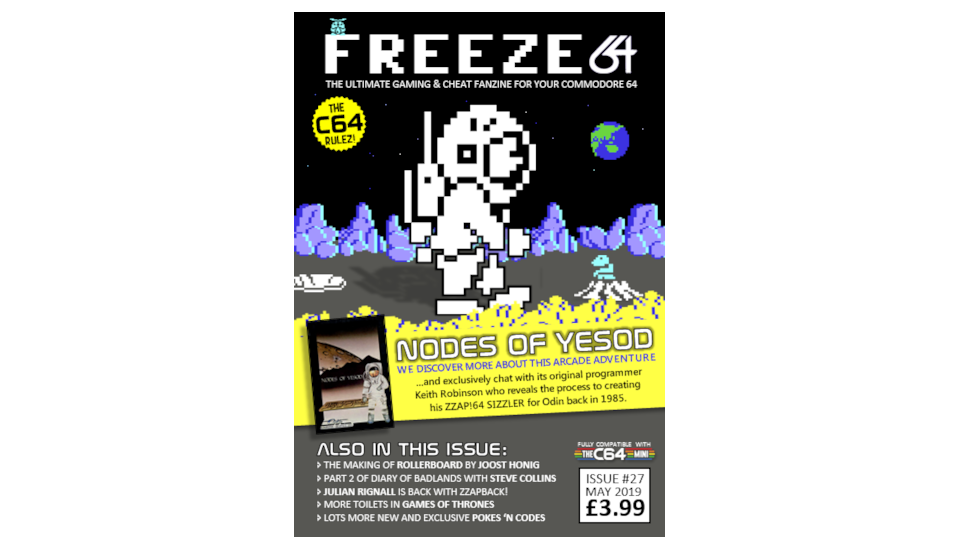 COVER FEATURE: NODES OF YESOD
It’s a fab game that deserves our attention, and so Nodes of Yesod by Odin gets a mini-review and then we play around with the code and share our findings with you all.

OUT OF THE ‘MOULDY CUPBOARD’
This time round, the incredibly quirky Bizy Beezzzz by Solar Software is salvaged from the Mouldy Cupboard. But was it worth saving, or does is need to be thrown back for the mould?

DIARY OF A GAME – THE MAKING OF BADLANDS
We travel back to 1989 with part 2 of The Making of Badlands by C64 programmer Steve Collins. A cracking feature, which you appear to be enjoying.

CODER’S CORNER: KEITH ROBINSON
We have a chat with Keith Robinson about the making of our cover feature game, Nodes of Yesod, along with his time programming commercial releases for the Commodore 64. Another cracking interview from FREEZE64.

GAMES OF THRONES – PART 3
Part 3 of our tongue-in-cheek toilet feature, which is also a nod to the humour of bedroom programmers from yester-year.

BITS ‘N’ BYTES
Two new and very different Commodore 64 games to share with you, which I *know* you’re going to enjoy.

THE MAKING OF… ROLLERBOARD
We chat with the delightful Joost Honig about the making of his 1987 commercial release, Rollerboard for Pirate Software.

NEW & EXCLUSIVE POKES ‘N’ CODES
We’ve got some tantalising cheats for The Age of Heroes and Lala Prologue.

MY C64 HEAVEN WITH DAVID ASENJO RAPOSO
FREEZE64 subscriber in Spain, David Asenjo Raposo, shares his Commodore 64 collection and highlights a few of his favourites.

Shipping is avaialble in the UK and the Rest of the World. Click the link below to get yours.