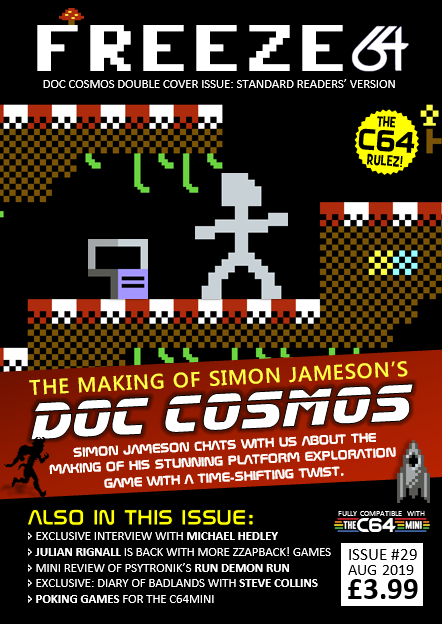 Issue 29 of FREEZE64 is now avaialble.

COVER FEATURE: DOC COSMOS
Here at FREEZE64 we’re crazy about the idea of time-travel, which is why we’ve chosen to celebrate this new C64 title by Simon Jameson, which has a time-shifting twist to it. Lots to check out, including a cool cheat that allows you to flick through the past and future at any time!

OUT OF THE ‘MOULDY CUPBOARD’
The Mouldy Cupboard always seems to churn up something different or interesting, and in the case of this issue’s entry, we have a game that doesn’t really know what to call itself… Dickies Diamonds or Dicky’s Diamonds. Confused? So are we! We’ll find out if this game is worth a play or two, or just throw it back into the dark Mouldy Cupboard.

DIARY OF A GAME – THE MAKING OF BADLANDS
The next instalment of diary entries from Steve Collins, which were originally written during the time Steve was making Badlands for Domark back in 1989. In this issue Steve starts to panic about the looming deadline!

JULIAN RIGNALL’S ZZAPBACK!
1986 was another cracking year for the Commodore 64, and our very own Julian Rignall takes a look back at the high-scoring games from issue 10 of ZZAP!64, which include The Eidolon, Fight Night, Bounder, and Revs.

CODER’S CORNER: MICHAEL HEDLEY
We have a chat with the lovely Michael Hedley about his time working on C64 titles such as WitchSwitch, Leviathan and Mediator. A cracking interview and lots for you to take in.

WE DON’T DO REVIEWS!
A mini-review of Psytronik Software’s Run Demon Run. It’s *not* a review because we don’t do reviews!

POKING GAMES FOR THE C64MINI
Are you one of those lucky owners of a C64Mini, but you’re not too sure how to use our exclusive POKES with your favourite Commodore 64 games on the C64Mini? Fear not because I’m going to show you how quick and easy it is to get cheating on the C64Mini.

THE MAKING OF… DOC COSMOS
It’s time to find out more about the making of Doc Cosmos by chatting with its cool programmer, Simon Jameson who shares the ins and outs of programming such a fab C64 release.

NEW & EXCLUSIVE POKES ‘N’ CODES
It’s the reason why I started FREEZE64 in the first place! POKES, POKES, POKES! This time round we have some exclusive cheats and features for The Coffee Break Shootout, Zombie Calavera Prologue, and Robot Rumble.

MY C64 HEAVEN WITH PERRY WARDLE
And finally – we corner FREEZE64 subscriber Perry Wardle and persuade him to share his C64 collection with you lucky FREEZE64 readers.