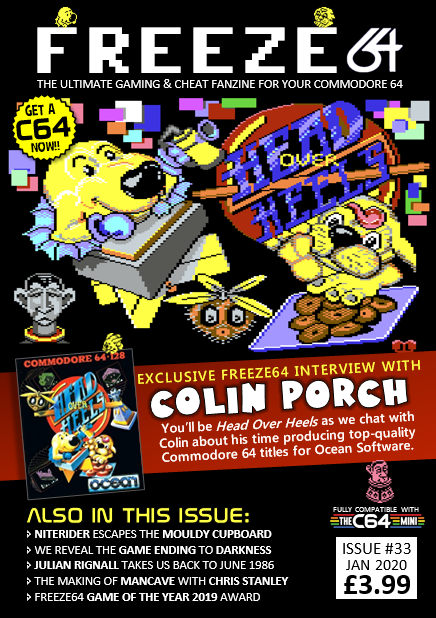 COVER FEATURE: HEAD OVER HEELS
A man’s (and woman’s) best friend is his/her dog, and so when Ocean Software created an arcade puzzler with two K-9s to control, you knew you were in for a treat. These two friendly pooches needed to work together as friends and partners to free the enslaved planets of the Blacktooth Empire. It all sounds very easy and incredibly fluffy… but trust me, it isn’t! We take a look at Ocean Software’s 1987 hit Head Over Heels and share some of our readers’ memories and thoughts about the game.

OUT OF THE ‘MOULDY CUPBOARD’
Hands up if you were a big fan of the TV show Knight Rider? Now – hands up if you were a fan of the lacklustre Knight Rider game by Ocean Software? I’m guessing that none of you raised your hands up to the latter… But did you know that there was another Knight Rider game that was released in 1984 by ACE (Advanced Computer Entertainment / Hitech Games Plus) Software? It was called Niterider and we happen to have a copy in our Mouldy Cupboard, which we’re going to whip out and review for you. Is it worth keeping out of the cupboard?

DIARY OF A GAME – THE MAKING OF BADLANDS
Steve Collins makes more progress with Badlands in his ‘Making Of’ feature. This time round he tackles the control system, which proves to be a bit of a challenge!

JULIAN RIGNALL’S ZZAPBACK!
We have the latest instalment of Julian’s ZZAPBACK, a regular monthly column in which he takes a trip back in time to look at the top games reviewed in an old edition of the classic Commodore magazine, ZZAP! 64. This month, he’s going back to 1986 and delving into issue 14—the June edition of the publication.

SECRET SQUIRREL INVESTIGATES
Even though he’s struggling to get through the winter, Secret Squirrel is back with yet another set of case files to share with you. He has hidden messages revealed in FRAK!, FREEZE64, and POTTY PIGEON.

CODER’S CORNER: COLIN PORCH
If you take a look at our cover issue feature on Head Over Heels, you’ll see that it’s a beautifully crafted game that was tightly coded by the great Colin Porch, who is also the programming talent behind other Commodore 64 hits such as Operation Wolf, Gryzor and Dragon’s Lair – to name but three. We catch up with the man himself and chat about his time producing Commodore 64 games for the commercial market.

SPOILER ALERT!
We’re back with another C64 game ending to share with you, and this time round we’re flung into a sprawling jungle map spanning 100 screens and taking on the role of Adventurer Stan who needs to rescue his girlfriend from Darkness…

FREEZE64 GAME OF THE YEAR 2019 AWARD
There’s no denying that Commodore 64 games are improving with each year that passes! Long-gone is the drought of the mid to late nineties, and a new dawn is upon us. We have been spoiled for choice during 2019, and now it’s time to pluck out some of the best of the best, and also reveal our FREEZE64 Game of the Year 2019.

THE MAKING OF… MANCAVE
After the successful release of Chris Stanley’s Exploding Fish in 2018, it wasn’t long before he was back onto the late-night coding sessions and working on his next C64 release, Mancave, which is a humorous and frantic arcade romp. We catch up with the man himself to find out about the making of his second Commodore 64 game.

MY C64 HEAVEN WITH DANIEL BORGE
We take a trip over to Gibraltar to check out FREEZE64 subscriber Daniel Borge’s collection of Commodore 64 goodies.