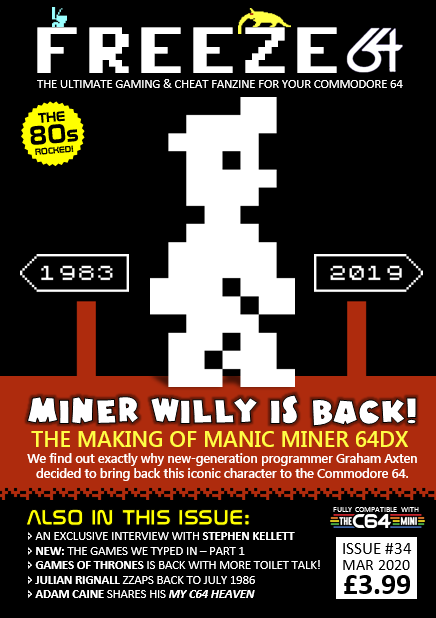 COVER FEATURE: MANIC MINER 64DX
Now I’m sure you’ll all agree that there isn’t much more we can say about Manic Miner that hasn’t already been discussed or reported on a million times over… But thanks to Commodore 64 programmer Graham Axten, we *do* have another reason to revisit the game, and it’s a pretty cool reason at that, which is Manic Miner 64DX. Lots to chat about.

OUT OF THE ‘MOULDY CUPBOARD’
As I am sure you’ve all come to realise, grabbing a game from out of the Mouldy Cupboard is always a gamble and it frequently surprises me how many of the games from inside the cupboard have slipped my mind and almost become brand new games for me to play… This is definitely the case for Percy by K’Soft, an arcade collect-em-up, which we have plucked from our infamous Mouldy Cupboard and loaded up for all to see.

DIARY OF A GAME – THE MAKING OF BADLANDS
Believe it or not, but we’re now on Part 9 of Steve’s incredibly interesting development diary for Badlands, a game he created for Domark back in 1989. We continue on from the last issue’s diary entry where we left Steve halfway through the day, and working on missile and drone car A.I…

JULIAN RIGNALL’S ZZAPBACK!
Our very own Julian Rignall takes a look back at top rated C64 games from July 1986, which includes Leaderboard, HES Games, Sentinel, Boulderdash 3 and Slamball. A fab collection of C64 games with impressive scores to boot.

SECRET SQUIRREL INVESTIGATES
Our intrepid squirrel finds something very strange and exciting hidden within a game by Alternative Software from 1992. Intrigued? We are too!

CODER’S CORNER: STEPHEN KELLETT
Our interviewee for this issue doesn’t have an instantly recognisable name, but you will have definitely played his fab games on the Commodore 64. Stephen Kellett is the programmer responsible for C64 commercial releases such as Aardvark, Raskel, and The Tube – to name but three. We catch up with Stephen to find out exactly what makes him tick, and how his journey into Commodore 64 gaming began…

GAMES OF THRONES – PART 3
Lots more toilet talk in part 3 of this bog-standard feature ;-P This time round we spot some white porcelain in Maniac Mansion, Dream House and Hunchback at the Olympics – of all games!

THE GAMES WE TYPED IN – PART 1
Back in 1984, I was a 13 year old schoolboy with limited income of £2.50 weekly pocket money. But only ever being able to afford one budget game a week wasn’t really full-filling my need for new and exciting games for my beloved breadbin, and so I worked out that purchasing type-in books for half the price could provide me with at least 3 new games a week. And that’s not all! Our local library had an impressive collection of programming books for the C64… for FREE! Result. We take a look at one of those impressive books and type in one of the cool
game listings.

THE MAKING OF… MANIC MINER 64DX
In our cover feature game for this issue, we checked out the recently released Manic Miner 64 DX, which was programmed by the great Graham Axten. Graham is one of a few programmers who have, in the past couple of years, made a massive impact on the C64 scene, and also produced some memorable and exciting games. We caught up with the man himself to have a chat about the making of his enhanced version of Manic Miner.

MY C64 HEAVEN WITH ADAM CAINE
You know the score by now: you give us your home address; we come over and look through your Commodore 64 collection; then we take all the best bits and leave you with the dregs… This time round we’ve raided the collection of Adam Caine who lives down in Southampton, which is in Hampshire, UK. Plenty of hardware!