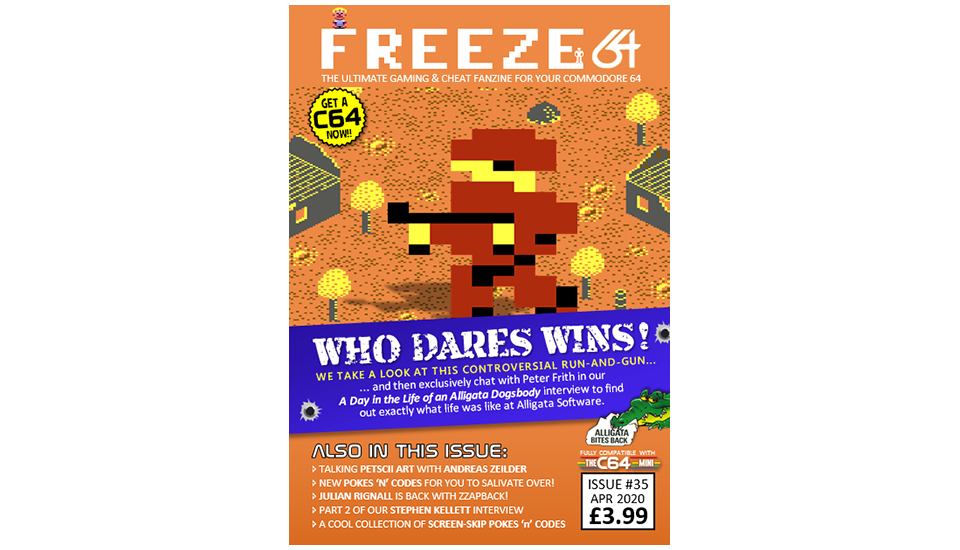 COVER FEATURE: WHO DARES WINS
Back in the eighties, arcade conversions ruled the roost. No matter where you turned, a new conversion was rapidly put into production and churned out to an eagerly awaiting audience. Most times things went smoothly and healthy sales were recorded; but on the rarest of occasions, something goes awry, and the frantic cogs come to an abrupt halt. Enter Who Dares Wins, a vertically scrolling run ‘n’ gun game programmed by Steve Evans, and originally published by Alligata Software back in early 1985. We take a look at this fab run’n’gun game from Alligata and find out what all the fuss is about with regards to the two different versions available!

OUT OF THE ‘MOULDY CUPBOARD’
When I was a kid, Friday night was always bath night… and I *hated* it. Looking back now, it’s strange to think that as kids my brother and I only bathed once a week! No wonder we had no friends! Peew! But Bath Time took on a completely different definition back in 1984 when Personal Software Services (PSS) released a strange arcade title by the name of … wait for it… Bath Time, which swipe out of The Mouldy Cupboard and investigate.

SECRET SQUIRREL INVESTIGATES
An oldie and newbie for this issue, which includes Vendetta from System 3, and Millie & Molly by Carleton Handley – both hiding dark secrets! Kind of…

A DAY IN THE LIFE OF AN ALLIGATA DOGSBODY
Back in 1983 Peter Frith had the most envious of experiences working at Alligata Software, and he chats with us to share his story of working in the early days of the Commodore 64 software industry. Cool and fascinating stuff.

SCREEN SKIPPING
Game hacking history shows that most crackers and hackers of Commodore 64 games opt for the usual, bog-standard cheats of infinite lives, infinite energy, and sometimes level skips. But here at FREEZE64 we like to go beyond the norm and push past the limits of a game, which is what we’re about to achieve in this new, little feature called Screen Skipping.

THE MAKING OF… PETSCII ART
In previous issues of FREEZE64 we shared our love for PETSCII art on the Commodore 64; art that is created using the standard built-in character set that you will find on the C64’s keyboard. Along with some well-chosen colours and appropriately placed characters, an artist well-versed in PETSCII art can produce the most stunning pictures – sometimes they can be more eye-catching than a typical hires image on our beloved beige breadbin. And so this time round I thought it would be interesting to chat with one of the current scene artists, Andreas Zeidler, who specialises in PETSCII art and find out exactly what makes him tick…

NEW & EXCLUSIVE POKES ‘N’ CODES
We present a whole-host of new and exclusive POKES ‘n’ CODES for Crackpots, and The Shadow Over Hawksmill.

MY C64 HEAVEN WITH MURRAY SNEDDON
Time to check out another C64 collection, and this time we’re in Basingstoke in the UK… We chat to Murray Sneddon who is one of our FREEZE64 subscribers and find out what he has to share with us all…

Another FAB issue for you all to enjoy!