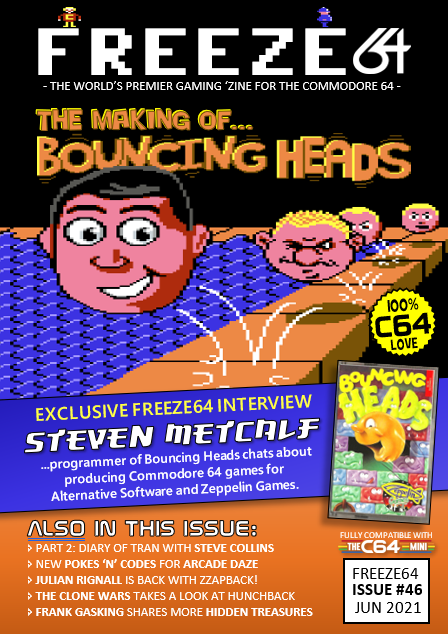 COVER FEATURE: BOUNCING HEADS (Zeppelin Games)
At FREEZE64, we’re all for the weird and wonderful, and love exploring the lesser-known Commodore 64 games of the past. It’s not always about the BIG GUNS or the most popular games; we want to explore and share C64 games that you may never have heard of and educate you along the way… So, let us introduce you to BOUNCING HEADS, which we take a retrospective look at, and then it gets put through the ‘Vinny-O-Matic’ for a rummage around the game code – producing a few interesting and useful POKES ‘n’ CODES along the way.

OUT OF THE ‘MOULDY CUPBOARD’: CRED BREAKS OUT
I think you’ve all got used to the fact that I own a lot of rare and very weird games for the Commodore 64, with most of them sitting within the Mouldy Cupboard… And none weirder than CRED BREAK OUT, which, for the life of me, I can’t remember HOW I got hold of it, but it was sitting there at the bottom of the cupboard calling out my name. Anyway – I’m guessing that around 90 percent of you will have never heard of CRED BREAKS OUT, and 99 percent of you will have never played it. It’s a rare one!

DIARY OF A GAME – TRAN BY STEVE COLLINS
We share Part 2 of Steve Collins’ Diary of a Game – The Making of Tran, which is an unreleased Game That Wasn’t for the Commodore 64. We continue with Steve’s development diary from Sunday 12th July, 1987 where he started a new internship whilst working on his new C64 game.

JULIAN RIGNALL’S ZZAPBACK!
Julian’s latest instalment of ZZAPBACK, a regular monthly column in which he takes a trip back in time to look at the top games reviewed in an old edition of the classic Commodore magazine, ZZAP! 64. In this issue, he’s going back to the summer of 1987 and delving into issue 28—the August edition of the publication.

SECRET SQUIRREL INVESTIGATES
Our cute, little investigator has been squirreling through more Commodore 64 game code and has found few hidden gems to reveal in System 3’s The Last Ninja 2 and 3. Always worth a look

DEVELOPERS’ DEN: STEVEN METCALF
Someone who has always been on my ‘to find’ list is Steven Metcalf, who is our interviewee for this issue. Steven isn’t someone who you will instantly recognise, but I’m sure you will have owned, played or stumbled upon one of his Commodore 64 titles for Zeppelin Games or Alternative Software. A very interesting read.

WE DON’T DO REVIEWS: BATTLE KINGDOM
In this edition of WE DON’T DO REVIEWS I’m handing over the reins to FREEZE64 team member Dan Tootill who is going to share his views on ICON64/Psytronik Software’s new arcade adventure, Battle Kingdom. I’ll also have a few comments to share with you all.

THE CLONE WARS: HUNCHBACK BY OCEAN
Since the dawn of computer games, there has always been a deluge of titles masquerading themselves as authentic and ‘unofficial’ releases of original and successful games… But now it’s time to name and shame these look-alike clones and find out exactly which games these so-called ‘official’ releases are trying to rip-off… starting with Ocean Software’s Hunchback, which was programmed by J. Steele and released back in 1983.

NEW & EXCLUSIVE POKES ‘N’ CODES
We share some exclusive cheats in the form of POKES ‘n’ CODES for Arcade Daze and Battle Kingdom from ICON64/Psytronik Software. You’ll DEFINITELY be able to complete the games from now on!

FRANK GASKING’S HIDDEN TREASURES
The second part of Hidden Treasures where Frank steps further into the software we play to see what secrets may lay within. This time round Frank takes a look at mysteries unlocked; not from within code, but through recovery of deleted data from disks. Who’d have thought it was even possible?!

A beautifully printed A5 Commodore 64 fanzine delivered straight to your front door.