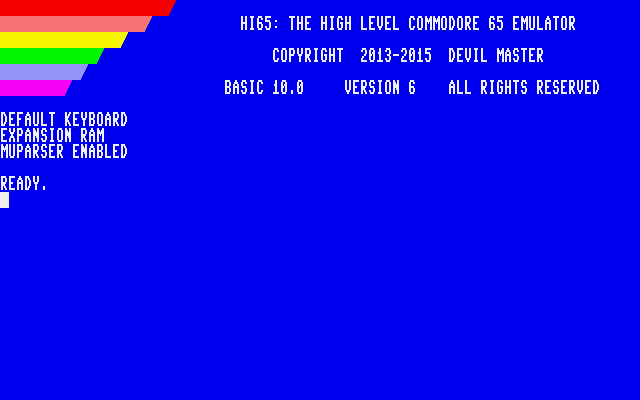 Since there were no notes about this release I reached out to Devil Master about this update and he reported the following:

Nothing in the emulator per se, I just fixed a bug in the frontend. But, since the package is different, I increased the version in the emulator executable too.
I’m working on a new version (version 7) that WILL have new features and will be released… when it’s done 😉

The Commodore 65 is an unreleased computer from Commodore featuring 256-color graphics, a 3.54 MHz processor and a maximum of 8 MB of RAM.

Hi65 is a high-level Commodore 65 emulator.

Hi65 does not implement a virtual version of the 4510 CPU (used in the physical Commodore 65), nor does it execute machine code software: it executes tokenized BASIC 10 programs directly, as if the various BASIC tokens were machine code instructions for its own virtual processor. Thus, the execution is much faster because it’s not limited to the clock speed of the 4510 (but the timing is still accurate) and it’s not limited by the scarce knowledge of the inner workings of the Commodore 65, because all instructions are made to do what the manual says they should do, not what they actually do on a physical machine (which may be buggy and inconsistent between individual machines).

Hi65 (the emulator), Hi65CFG (the command line configuration software) and Hi65 Edit and Launch Tool (the graphical frontend) are released under version 3 of the GPL (GNU General Public License). If you do not have a copy of the license, go to http://www.gnu.org/licenses/gpl.html to read it.