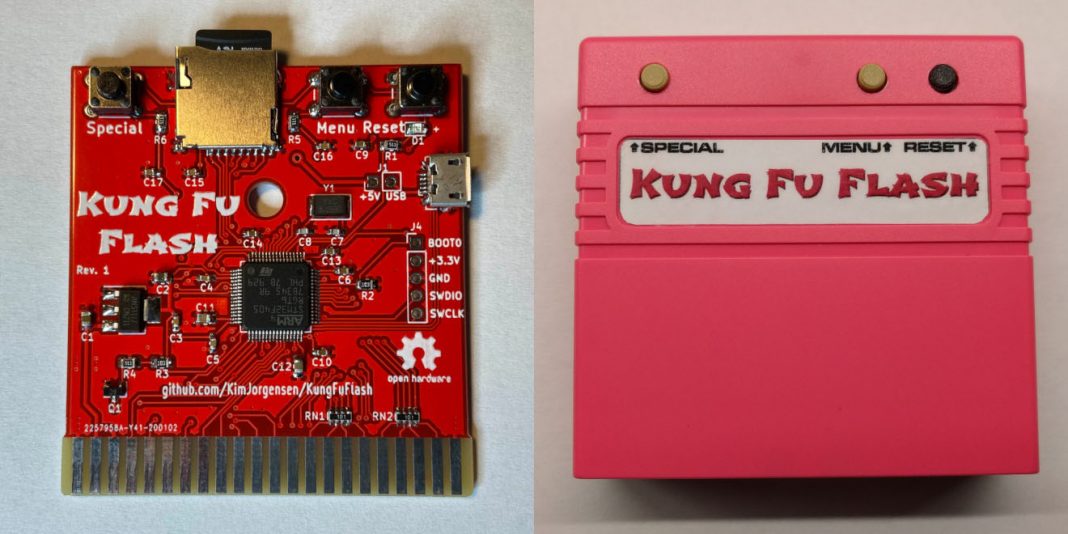 Kung Fu Flash is a new cartridge by Kim Jorgensen that can emulate different C64 cartridge types, load PRG files and use D64 disk images. Just place your desired CRT, PRG or D64 files on a FAT formatted microSD card and use the built-in launcher to execute them. 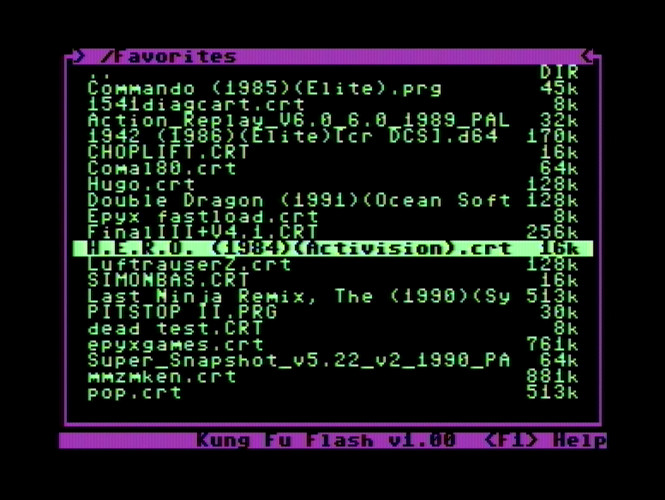 There are three buttons on the cartridge; a reset button, a menu button for starting the launcher, and a special button that is used by the freezer cartridges.

The PCB will fit the Stumpy Cartridge Case from TFW8b, you just need to drill some holes for the buttons and make a cut for the microSD card. If you plan to use USB you will need to cut a hole for that as well.

You can also 3D print a cartridge case as the one designed by bigby, see here.

The USB port is active while the launcher is running allowing programs to be transferred from a PC using the EasyFlash 3 USB protocol. Kung Fu Flash shows up as a standard serial port when connected to a PC not requiring any custom drivers to be installed. This means, however, that the program on the PC side must be modified to support Kung Fu Flash. For that reason a modified version of EasyFlash 3 USB Utilities has been included in this repository.

Just place the KungFuFlash_v1.xx.upd file on the SD card and select the file in the launcher to initiate the firmware update.

Kung Fu Flash is a so called Software Defined Cartridge where a fast microcontroller emulates cartridge hardware in software. This makes it extremely flexible, allowing different cartridge types to be supported at a relative low cost.

However, it can be challenging to get the C64 bus timing correct in software and in some places the timing is very close to the limit. Even though Kung Fu Flash has been tested on different models of the Commodore 64, there is a chance that it doesn’t work correctly on your specific model. Use it at your own risk!

Kung Fu Flash will only work with the PAL version of the Commodore 64 or Commodore 128. The NTSC version is currently not supported. Disk drive emulation is using kernal vectors and will not work with fast loaders. Currently REL files are not supported and there is no write support.