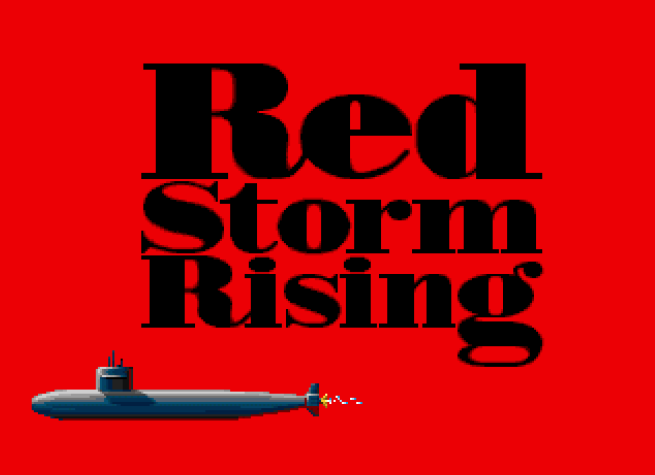 Back in the Commodore 64’s heyday we had a handful of submarine simulators. It all started in 1984 with the release of GATO by Spectrum Holobyte. I’m sure it was amazing when it was first released, however it’s basic when compared to its later cousins. But hey you have to start somewhere right? Next in 1985 came Microprose with Silent Service. Immediately the bar was raised to new heights. Following that in 1986 was Up Periscope! from Actionsoft. I remember there was a lot of hype for this game when it came out however I never played it.

In 1988 Microprose returned to the submarine game platform with Red Storm Rising which is based off of Tom Clancy’s famous novel of the same name. Red Storm Rising is not a full submarine simulator and is actually more of a hybrid beast. Part submarine warfare and part strategy game. In this game you are the commander of a Los Angeles Class submarine in the Norwegian Sea and if you’re playing the campaign your game progresses as the events in the book unfold. The Commodore 64 edition of the game was also co-developed by the legendary Sid Meier.

What’s in the box?

Gamers today are really missing out on the treat that was opening a game back in the 80’s and earlier 90’s. In this box you first and foremost receive a finished game. Not a beta, or a campaign with only half the missions. You get a fully finished, bug free game that’s ready to be played. In addition you’ll find a player manual that throughly explains the game and how it works. A highly detailed keyboard overlay, supplemental support documentation specific to your computer and the all important product catalog. This was the standard in the early days of gaming. It’s similar to when you bought vinyl (record albums) back in the day. The album had liner notes, posters, booklets, etc. It was an experience. I really miss it.

Your mission, should you choose to accept it.

With the overlay in place and the all important Load “*”,8,1 entered on the screen it’s off to the races. The game starts with the selection of 4 different timelines to choose from and each of those timelines realistically reflect the technology available to you and your enemy. Next you choose your submarine via the following classes. Permit, Sturgeon, Los Angeles, Improved Los Angeles or Seawolf.

Next come the skill levels, of which there are four, and then finally the main menu. While the heart of the game is the campaign, you can certainly play skirmishes before fully committing to World War III. These are called Battle Simulations and they are there for improving your skills. Another itme of note is that Red Storm Rising is also a single player game. While we had dial-up modems in 1988, online gaming wasn’t quite ready for prime time yet.

Red Storm Rising truly has one of the most dynamic campaigns I’ve ever played in a wargame. Missions range from surface convoys and carrier tasks forces to amphibious landings, cruise missile assaults and of course Soviet wolf packs. In addition if you replay the campaign later the missions and their locations are truly random so you will never play the same game twice.

Now that you have committed to a mission you receive your orders from COMSUBLANT. You arm your submarine and head out to sea. A map of the Norwegian Sea appears and you’re off towards your first target. The red on the map indicates Soviet controlled areas and the red army will either expand or retreat based on your mission successes or failures. Once you have acquired your target you’ll load your tubes and call General Quarters. From here the main tools that you will be engaging the enemy with are your Tactical Display and Weapons Control screens as well as the other options on your Function Keys. The action gets hot and heavy as you go toe to toe with Ivan’s forces.

And so it goes… If you make it to the finale you will find yourself in a race to stop the Soviets from launching their doomsday nukes. If you win, you save the world and you return home to a ticker tape parade with thousands of cheering citizens. However if you lose, well then comrade… the world will never be the same. I promise though no matter the outcome, you will have a heck of good time with a game that is just as good now as it was when it arrived 30 years ago.

I would like to thank the Youtube page Conga Line Monkey for the use of the intro to their their Red Storm Rising play through. Check them out for more Commodore 64 game videos.