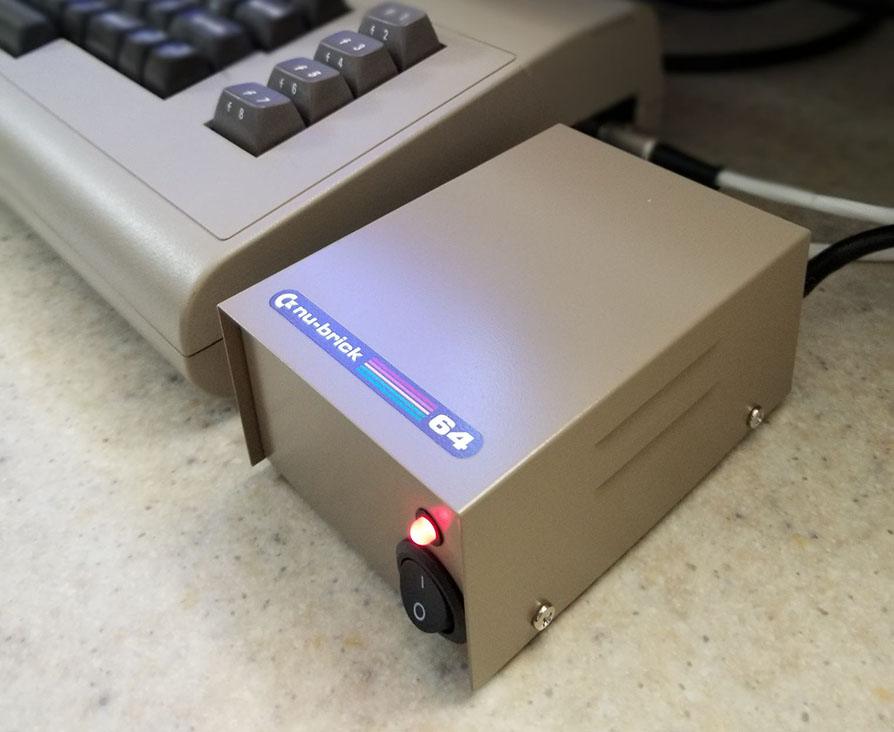 It’s been several years since Kevin launched the original Nu-Brick 64 Power Supply and now he’s back with an updated version.

The first thing you will notice is that there’s now a power switch conveniently placed on the front of the Nu-Brick 64. No more pulling the plug from the C64 or the wall jack. Both the input and output cables are now on the rear of the device which makes it easy to tuck them behind your monitor stand or behind other equipment. Also on the rear of the Nu-Brick 64 is an easy access fuse socket in case you ever need to replace the fuse.

The device has a very low-ripple 5v @ 3A switchmode power supply for the 5vdc side, and a standard 9vac @ 1A transformer for the AC side. It is fused in 3 ways: 1A external fuse, the switcher has its own built-in soldered fuse, and the 9VAC output is also fused, in case it gets shorted, you don’t want the transformer to overheat. Last but certainly not least, the Nu-Brick 64 comes with a 1-year warranty.

The device is repairable. Kevin reports that in the five-plus years he’s been building these he has never had one fail. However parts are replaceable, for example, the switcher can be changed out in less than a minute.

The Nu-Brick 64 is also compatible with either the Commodore 128 or Plus 4 computers via pigtail adapters which Kevin sells for $15 each.

The Nu-Brick Amiga is available for $75 and $15 shipping.