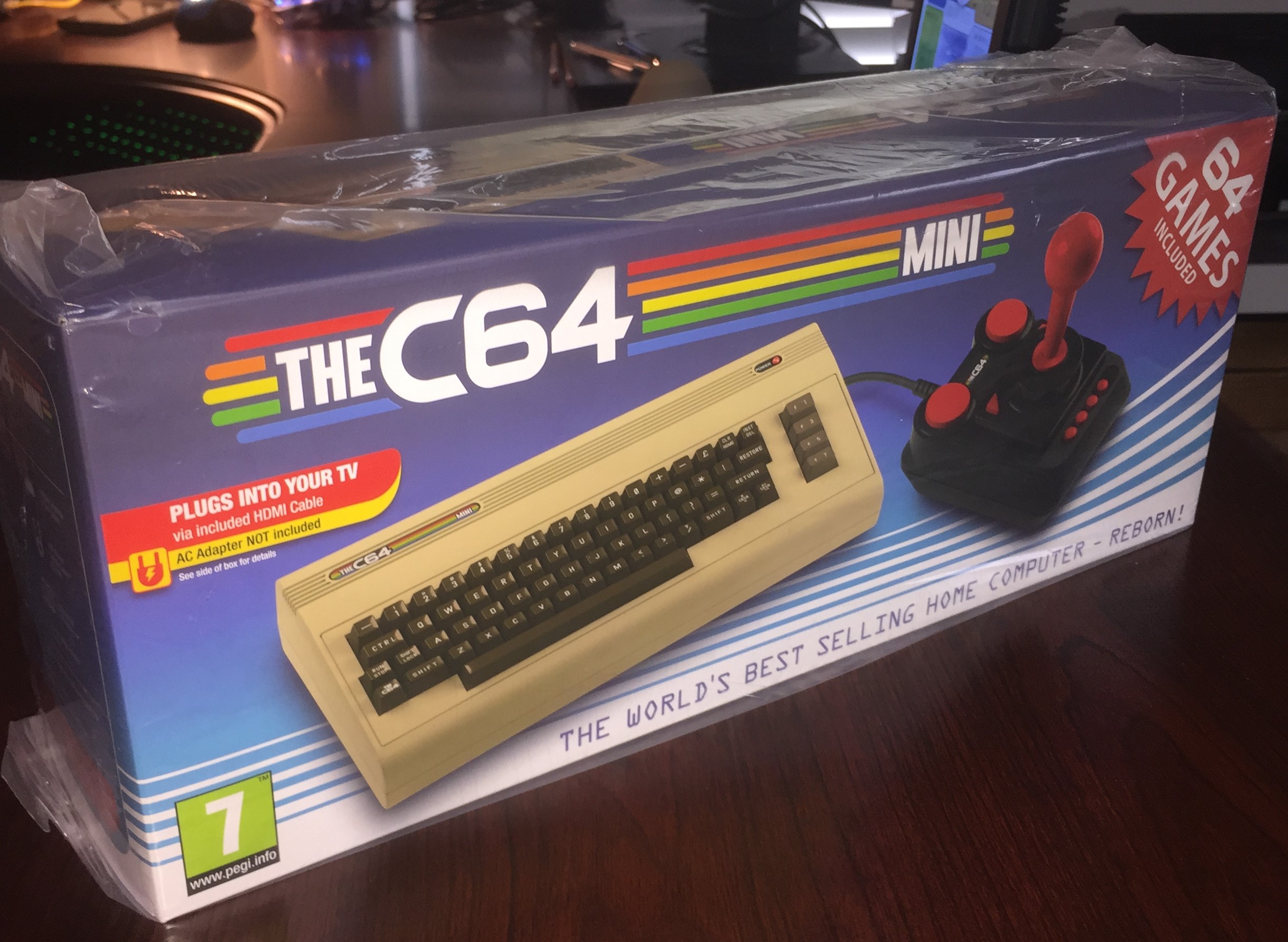 The answer is no. You are an emulator.

Oh you’re fancy. All dressed up to look like a Commodore 64 but smaller with a fake keyboard. You are loaded with games, the majority of which I have either never heard of and/or never played. You include a joystick that is not comfortable to use and just feels cheap. If I want to use THEC64 mini to program something I can do that too…oh wait, let me go find a USB keyboard to plug in as its keyboard is just for show. Now you can download firmware updates, not to add games (maybe later) but to add functionality that was left off the unit in a rush to get SOMETHING out to stakeholders.

If I seem a bit put off by THEC64mini, I am. I signed on to the funding page at INDIEGOGO on 4/24/2016. I pledged my money on a full sized ‘computer and games console’; a modern version of the C64. Two years later I have yet to receive the aforementioned item. It seems that the project did not make it to the monetary threshold that had been set. There were a lot of delays and explanations of what was going on in the background with assurances that the products would be delivered soon. This has gone on now for two years with pictures of the work in progress and videos of all of the games that would be included with MUCH hype that Sam’s Journey was now in the list.

I include this link to the project page where you can see for yourself. Please take note of the extensive referencing to Sam’s Journey. It is not part of the mini and I am pretty sure that the mini just couldn’t handle it. Hopefully it will be on the Full Sized version of THEC64.

Two years later and now they are ‘trying’ to distribute THEC64 mini and touting it as a grand achievement. It’s just not. At best I would give it a ‘MEH’. It is a nice novelty gift but falls short on most other points. I can do the same thing with VICE – FOR FREE! So why would I purchase the mini for $70+?

I speculate that they felt if they got the console out quickly (oh brother) they could use that infusion of money to finish the original project for the Full Sized product. Below are direct quotes from the project folks concerning the MINIs being shipped out to backers and info on the Full Sized Version in their April 2018 campaign newsletters. (Their words not mine)

“Backers all over the world are now confirming their FREE mini console, and poster sets are starting to arrive, so if you have not had it yet, don’t panic they are all in transit! Plus don’t forget the FREE items are just to tide you over till the full sized arrives with you later this year, and also to say thank you for your support!

THE FULL SIZED – This is still coming and we will be doing updates on this in the near future, with some early previews as soon as we can also.”

So in conclusion my personal recommendation would be to take a pass on THEC64 mini at least for now. I would wait until the price drops significantly or maybe you can find it at a yard sale or Goodwill store at a reasonable price.

While it does (for the most part) what it claims being a retro gaming machine, there is already a firmware update to fix an issue encountered on some two player games when using USB joysticks.

On their website thec64.com they have the following listed for future firmware updates.

I am sure a lot of work went into the selection of games used in the mini but as I said earlier there are an awful lot of games included that I have never heard of. I am thinking that most of those games are European. If I am wrong, I apologize. EPYX is well represented in the collection with Boulderdash, Impossible Mission, Impossible Mission 2, Jumpman, Pitstop and the Games – Winter, Summer, World etc. What might have helped them would have been to include familiar games like Omega Race, Archon, Raid on Bungling Bay, Ms. Pacman, M.U.L.E. ,GORF, Gyruss and/or Bruce Lee or any number of the old cartridge games…the list goes on and on.

Maybe there was a licensing issue but I think if they could have pulled that off, the appeal of the system would have reached a broader audience which in turn would have driven up sales. Possibly with the continued firmware updates they can they can reach their goal. My hope is that any bugs or issues are corrected before they finally deploy the full sized version which I ordered this very day two years ago and have yet to see or receive.