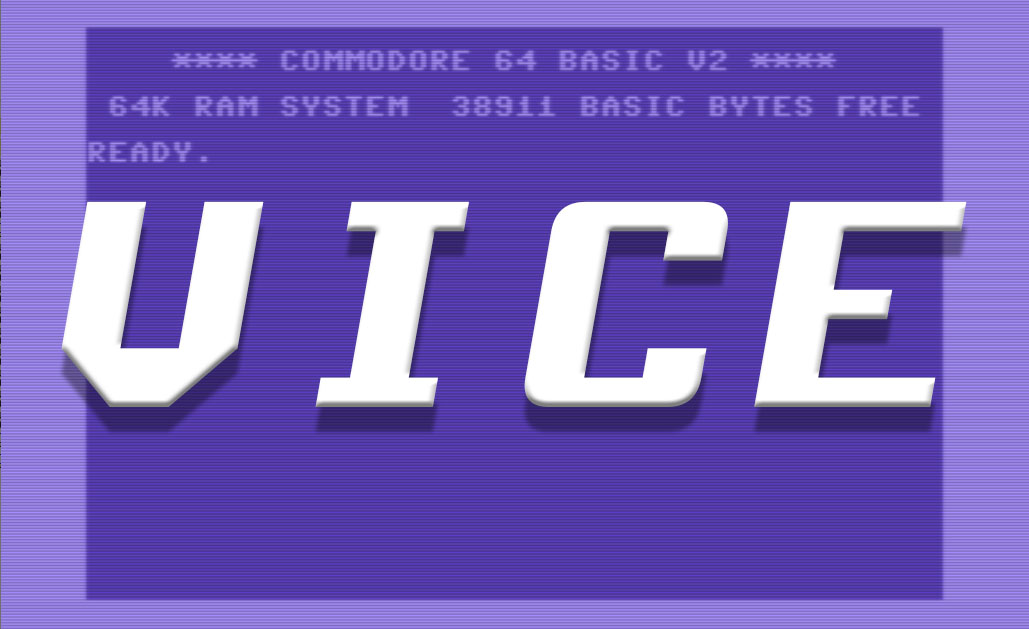 VICE is a program that runs on a Unix, MS-DOS, Win32, OS/2, BeOS, QNX 4.x, QNX 6.x, Amiga, Syllable or Mac OS X machine and executes programs intended for the old 8-bit computers. The current version emulates the C64, the C64DTV, the C128, the VIC20, practically all PET models, the PLUS4 and the CBM-II (aka C610/C510). An extra emulator is provided for C64 expanded with the CMD SuperCPU.

If you run into trouble please try removing any VICE configuration files left over from previous installs.
(vice.ini / .vicerc / vice2.cfg / vice-sdl.ini depending on platform)

Before reporting bugs, always try with a clean config: Run the emulator with the “-default” command line argument or use “restore default config” in the UI).

This is a service release which fixes some regressions and annoyances reported
by our users after the 3.6 release.

– Fixed sound buffer underrun behaviour, it will now cause a small glitch and no longer disable sound or flood the log with warnings.

– Do not write the log to a file instead of stdout when stdout is already redirected to a file or pipe, so we can do just that on the shell.

– At exit, put quotes around parameters of the regenerated command line options so ex. filenames with spaces in them will not break it.

– Suppress warnings about duplicated labels when playing back monitor commands to make mrsid a happy bunny.

– For cartridges that contain RAM that can be loaded from (and saved to) a file, do not init RAM on powerup if backed up by a file (mimic battery backup).

– Do not clear the keyboard input when a ‘reset’ hotkey was pressed. this allows to “hold” keys when pressing reset, for example “run/stop” when resetting FC3. Note that this still is limited by various other things, like the keyboard mapping and keys reserved by your window manager.

– FFMPEG recordings now default to mp4/h264/AAC instead of some divx avi bullshit.

– On smart attach automatically change the drive type also when not autostarting.

– In some cases the wrong drive was selected automatically on smart attach.

– Version x.y.0 builds will now generate a version number of x.y (no .0).
Additionally, support for semver style build labels has been added, allowing
versions such as 3.6-beta, 3.6.1-beta, etc.

– Set default ram size for ramlink to 16mb, enable it on ROM attach.

– Tracked down and helped fixing an upstream GTK bug that made VICE crash on any
keypress under certain conditions, making VICE work again for Jazzcat 🙂

– Allow negative coordinates for windows, this should fix restoring the window position that was broken on some multi-monitor setups.

– Make the monitor window “remember” its position and size between invocations.

– Position and size is saved along with the settings.

– Made joystick/control port tabs only show the extra ports when they are
available.

– Correctly use the LED colors for drives > 8.

– Added clickable LED for the CAPS aka DIN/ASCII key in x128.

– Don’t grey-out sound setting widgets when sound is disabled, so configuration can be changed before enabling sound again.

– Allow for a few more modifiers when setting hotkeys.

– Filter certain modifiers that are only getting in the way (eg numlock).

– Remove old hotkey from the table when redefining.

– Only show actions that have a corresponding menu item.

– Use hardware keycodes to figure out the key that was pressed. fixes eg the
situation on macOS that hotkeys could not be defined because they produce
various symbols.

– Fixed macOS bindist not working if placed in path with a space in it. Also the runtime cwd will now default to the userâ€™s home directory, unless launched using the CLI scripts in the root bin folder in which case the current cwd will be preserved.